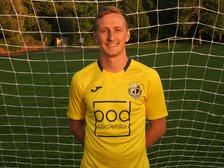 The Cons welcomed Docks Albion to the University Playing Fields for their first game since the end of November, on a good afternoon for playing football.

Alec Stevens made his First Team debut for the home side, but not how he expected!! He joined the Club this season as a midfield player, but was asked to play in goals due to the late withdrawal of regular keeper, Gaius Toozer.

The Cons made the most of the fine conditions by playing some very good football early on, missing a number of excellent opportunities. However, on 17 minutes a finely weighted through ball was played by Jon Counsell down the inside right channel for fellow midfielder, James Hinder to run onto. He beat the offside trap, and advanced on the keeper, slotting home the ball inside the far post. This was a just reward for the home side who were controlling the game playing a very good passing game.

Despite their dominance, they were unable to increase their advantage until late in the first half. On 38 minutes, some intricate work by Rickie Jones and Sion Morris down the left allowed Morris to cross the ball to the near post where striker, Rob Condliffe was able to meet it with a flick header to beat the keeper at the near post. 2 minutes later a fine reverse ball by striker David Williams, saw Condliffe and Counsell both challenge the Albion keeper for the ball. The ball sprang free for Condliffe to slide home into the empty net to give his side a fully deserved 3-0 lead at half time.

The second half started badly for the Cons. With only 2 minutes on the clock after the re-start, defender, Matthew Perry, lost out in a foot race with an Albion player into the penalty box, chasing a through ball. The striker was able to fire home left footed to reduce the deficit. 8 minutes later they lost their Centre Back, Craig Parker, with what looked like a hamstring injury. Player manager, Tom Mouncher, was forced to come on as a substitute due to the lack of available players. He came on up front causing a re-shuffle of personnel in the Cons team.

This disruption clearly affected the home team who were now struggling to compete, and the Albion were gaining the upper hand. So much so that in a 14 minute period from the 66th minute they scored 4 goals ~ 3 long range shots and a header from 1 yard out, all giving keeper Stevens no chance, to give them a 5-3 lead, with 10 minutes of the 90 to play.

The visitors were then forced themselves into making a change due to the injury of their centre back, which saw them become more defensive. The Cons in turn went to playing 3 at the back and 3 up front as they tried to salvage a point. This change proved dividends, as on 85 minutes Condliffe won the ball on the right hand side of the penalty area and was able to square the ball to Rickie Jones to side foot home from 6 yards out.

Due to the amount of injuries, there was going to be a fair amount of additional time in the game, and it was the Cons who took advantage of this. With 91 minutes played a Cons corner from the right, taken by Dan Walsh, was met at the near post by centre back Gareth Lloyd where he was able to head home from close range, to bring the scores level.

With their tails up, and the Albion very much on the defensive, it was the Cons who went looking for the winner. On 94 minutes, Walsh was again the provider, this time firing in a cross from the right hand side which was superbly headed home by Rob Condliffe to complete his hat trick, earning his side a great comeback win and him the man of match award.