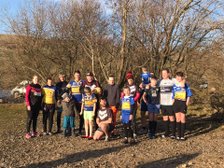 Crusaders add to the fundraising for the Rob Burrow fund.

On New Years Day, whilst others shook off the excess of the night before with paracetamol, a lie in and comfort food, Catterick Crusaders tried another method. By dipping themselves in the extremely chilly Semerwater in Wensleydale.
However, all the volunteers, parents and players involved hadn't completely lost the plot, it was, in fact, to raise money for a great cause.
Tragically former Leeds Rhinos player, Rob Burrow, was recently diagnosed with Motor Neurone Disease (MND), since then the world has come together to raise funds. Crusader Coach Kirsten Civil, thought it would be a great idea for the club to do something too, and so presented the idea of a New Years Day Dip. The response to the event was great and to support the fundraising a JustGiving page was set up. The total was set at £200 to raise, however by the time of the dip the total was at £300 and, by the end of the day, Crusaders had raised £350 online and £115 at the event, smashing all expectations!
A great effort by all concerned. The JustGiving page will remain open until the end of the month so if you would like to donate, it's not too late. For those that have already donated, thank you very much.
A clip of the dip can be found on Facebook page, take a look!https://www.justgiving.com/crowdfunding/jason-grant-1?utm_term=XDPpN4DNb
Share via
FacebookTwitter
https://www.pitchero.com/clubs
Recent news