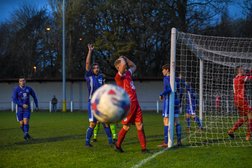 Chadderton fell to their third successive defeat as Lower Breck ran out 3-0 winners at the Ark Fleetech Stadium.

Goals from Michael Douglas, James Colbeck and Stephen Milne secured the away side all three points and saw the Chad drop to 12th in the Division One North.

Within the first ten minutes the warning signs were there as Lower Breck had a golden chance to take an early lead, Stephen Milne sending a low cross goal bound only for two time player of the month winner Jordan Hadlow to produce a brilliant reaction save and tip the ball clear of danger.

Despite another smart save from Hadlow to deny Milne, it seemed only a matter of time before the deadlock was broken and on the half hour mark the away side finally got the better of the inform Hadlow.

A well worked set piece routine found Paul Mooney on the wing who swept the ball across goal to centre back partner Michael Douglas who had the easy task of tapping home.

Chadderton started the second half much better than they ended the first, winger Aaron Scholes should have done better after the ball fell to him from a corner but he blazed his shot wide. Another chance fell to Scholes around the 75-minute mark after a knock down from Sam Fitzgerald but again he put his shot wide of the post.

As the Chad pushed for the equaliser they were punished on the break as Reece Lyndon saw his glancing header get blocked and Lower Breck capitalised, Substitute James Colbeck tucking the ball home at the other end to put the game beyond doubt.

There was still time for one more goal as the away side were awarded a late penalty, striker Stephen Milne finally getting his goal after going close on a number of occasions.