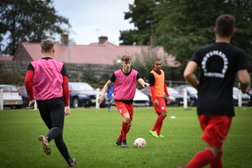 The Chad’s Wembley dream is over after a 3-1 loss to Northern League Division one club Guisborough Town in the FA Vase.

After a lively start to the tie, which saw Chad winger Joseph Richards subbed off after a robust challenge ended his afternoon after less than a minute, Guisborough struck first blood, as a deflected cross from the right hand side fell to Sonni Coleman who reacted first to head home from close range.

The goal seemingly woke the home side up as Daniel McLaughlin went close with a half volley and James Dwyer hit the bar from a corner after brilliant work from Dillan O’Connor in the centre of the park. It seemed only a matter of time before Chadderton got on the score sheet as the pressure was mounting on the away sides defence and the blow came just before halftime.

Jack Turnbull played a lofted through ball over the top to centre forward McLaughlin who held the ball up superbly before squaring the ball back to Turnbull who was upended in the box with the referee having no doubt in pointing to the spot.

Captain Turnbull picked up the ball and slotted the ball confidently to the keepers left to equalise and send the sides in level at the break.
Again, it was the away side who started faster of the two teams after the restart, and it was that man Coleman again who proved to be the difference.

The striker was played through on goal and twisted one way then the other before finishing clinically with his left foot to send the travelling fans into delirium.

Unlike when they went a goal down in the first half, the boys couldn’t get themselves back into the game and despite half chances for Ben Matthews and the returning Reece Lyndon failed to create any clear-cut chances.

And it was the away side who looked more likely to score as Jordan Hadlow produced a spectacular fingertip save to deny Steven Roberts’ outside the box effort.

But there was nothing the Chad keeper could do from the resulting corner as Matthew Crust rose highest to nod home and cement Guisborough’s place in the next round.

Despite the result the players didn’t look out of place against a team playing in the league above and matched them for large parts of the game, with many positives to take back into the league campaign things are looking good for the Chad.