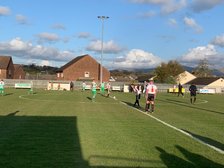 Chadderton suffered a heavy away defeat at the hands of Cleator Moore Celtic’s in their return to league action after a month of cup disappointments.

A hattrick from Josh Charlton and one for Callum Birdsalll meant Reece Lyndon’s late consolation meant nothing as the away side struggled to impose themselves against a strong team.

The Chad trialled a new five at the back system which within the first ten minutes looked to be in tatters as Cleator Moore broke through at will. Jordan Hadlow making two brilliant one-on-one saves from Thomas Wary, as the home side exploited a wealth of space behind the back four, but it seemed only a matter of time before the deadlock was broken.

The Celtic’s yet again took advantage of the space in behind as Tom Mahone played an inch perfect through ball and this time Callum Birdsall made no mistakes in slotting home his fifth goal of the season and giving the home side an early lead.

The Chad thought they were back on level terms not long after as Lyndon controlled a cross from Dillan O’Connor and swept the ball home only to be flagged offside.

Chances continued to be squandered by both teams as the Chad continued to look fragile at the back but had a better spell going forward with Lyndon heading wide from a corner and Danny McLaughlin misjudging a cross and the ball ricocheting off him and just wide.

But this good spell came to an end just before halftime as the hosts doubled their lead after Jack Charlton dispatched a low cross into the roof of the goal. And the Chad started the second half just as bad as the first ended conceding a quickfire double to end the game as a contest.

Yet again one ball was enough to split the back four and Jack Charlton raced through and finished calmly for his second of the game. Two minutes later it was four as a breakaway ended with Charlton heading home from the back post to seal his hattrick and the three points.

A late consolation from Lyndon, who could’ve had a hattrick on the day, regained some amount of pride for the away side, and with not long to go Steve Affleck and the home sides Owen Charlton were both sent for an early bath after an off the ball incident gave the referee no choice.

Far from a vintage performance, changes will need to be made if Chadderton harbour any aspirations of going up this year.