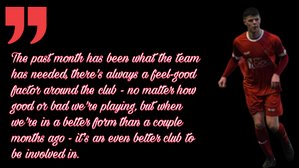 Our midfield maestro, Jordan Butterworth talks us through the season so far and much more.

Jordan Butterworth has been instrumental in the reds' midfield throughout the current campaign so far and we were lucky enough to sit down with the youngster ahead of Saturday's trip to Shelley.

"I'm feeling good about my game at the moment", said Butterworth. "I'm playing week in, week out which is always positive as a young lad playing football."

Reflecting on a successful month or so for the football club, Butterworth added: "The past month has been what the team's needed, there's always been a feel-good factor at the club regardless of results. When we're in good form, it's an even better club to be involved in."

After winning three consecutive matches, the reds suffered a narrow 1-0 defeat to Emley on Saturday, but despite the result, Butterworth admits that the lads must remain positive.

"We knew that Emley were going to be tough opponents for us. We should've definitely taken something from the game, though. Everyone was disappointed to lose the match, that's just how far we've come as a team. I think after a good training session on Thursday, it will be all it takes to get the lads buzzing again and ready for Saturday's match."

Butterworth also spoke about the feeling of pulling on a red shirt and just how much it means to play for Chadderton Football Club.

"When you put on that red shirt, you know you're going to be backed by the management team - so it's good. You have to work hard to keep your place in the team as we have such a strong squad away from the eleven players that start matches."

As far as what Butterworth brings to the squad, JB talks us through his game and what he's all about.

"The strongest part of my game is definitely my distribution - I like to get the team playing football on the floor, although the conditions aren't always suitable to play that way. I think my breaking up of the play is also growing stronger and I think that's important as a central-midfielder."

JB continues to talk us through his game and particularly his relationship with Jordan Rutter in the heart of the midfield.

"It's great playing alongside Rutter because it gives you the freedom to get yourself forward and create openings for the team. You know he'll sit in front of the back-four, I've always been that player that plays just in front of the defence, so playing with Rutter allows me to go and get forward when we're going through a bad patch and it's great to have him in the team."

Ahead of Saturday's trip to Shelley, Butterworth admits that the reds fear no-one and the lads will be going all out or the win.

"We know that Shelley are in good-form, but anyone is beatable in this league. The way we've been playing, I'd back us against anyone, playing away from home doesn't bother us in the slightest."

After several departures earlier on in the season, Butterworth admits that the togetherness of the squad is there for everyone to see.

"We're all good mates here," said JB. "Everyone is one big group here, no little individual groups of friends. We all have a laugh and we all have the desire and the will to win."