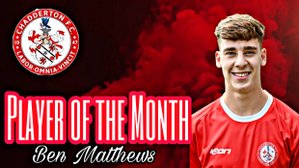 The reds' dynamic centre-half, Ben Matthews picked up the JW Lees Player of the Month award for January.

Our dynamic and consistent centre-half, Ben Matthews picked up the JW Lees Breweries Player of the Month award for January - after producing a series of heroic displays from a defensive sense and his creativity when moving forward.

Matthews' played a major part in the reds' success in January, which saw David Fish's men win three out of five matches - which included a sensational 7-0 win over Cleator Moor Celtic on home soil.

The gaffer, David Fish was the first person to pay homage to Matthews following the announcement in regards to the Player of the Month award and Fish insists that Matthews is versatile and a natural leader.

"Ben came to us as a left-back, but looks right at home in the centre-half position. He's quick, good in the air and brave. In the matches against Emley and Darwen, he put his body on the line.

"He can also play the ball very well, stepping out of defence can often draw players out from an offensive point of view and create openings for the team. Ben's also a leader and has stepped up to be the voice amongst a very young back-four."

After receiving the award, Matthews was delighted and insists that the team spirit amongst the group is impressive to say the least.

"I'm very happy to win the Player of the Month award for January," said Matthews. "We've had a tough few matches and winning three out of five capped off a successful month for us considering the opposition we faced. We picked up a great result on Saturday at Ashton Town and we've got to carry that momentum into next week, because it's another massive game for us."

Matthews also expressed his desire to pull on a red shirt every week, insisting the work ethic and confidence within the group is very high.

"The atmosphere around the club is fantastic. We're a good unit which has shown in our recent results - where we've had to dig deep to get points on the board. It makes me feel proud to be part of a team that are continuously battling with some of the toughest opposition in the league. Especially when there's clubs throwing cash at players and we're able to maintain such a strong squad who can compete with the very best."