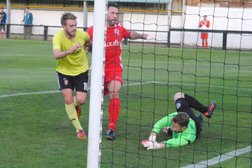 Despite the best efforts of Rhys Hardacre and Anthony Lyons, Turnbull's treble alongside further strikes from Brad Kay and Leon Iluobe ensured David Fish's side returned to winning ways on Merseyside.

Chaddy headed into the tie on the back of Saturday's disappointing 0-1 home defeat to Nelson - a game which they had more than enough chances to win - but they immediately found themselves on the back-foot this time out.

Just 12 minutes had passed by the time the hosts found the net. Callum Schorah brilliantly turned and volleyed past Jordan Hadlow from the edge of the area, but the attacker's effort was chalked off due to an offside infringement.

Chadderton would respond though and carved a chance of their own minutes later when Kay worked his way into the 18-yard-box before firing across Lee Carr, but the AFC Liverpool stopped pulled off a good save down to his right to thwart the effort.

The hosts had a second goal ruled out for offside in the 18th minute. This time, Lyons looked to have beaten the offside trap before coolly slotting past Hadlow - but the effort was again deemed offside.

Chadderton's determination and perseverance paid dividends in the 32nd minute when Turnbull grabbed the first of three strikes. The forward reacted quickest to pounce on a loose ball and stab past Carr to give the visitors a deserved lead.

Turnbull's effort proved to be the only goal of the opening period, but after the break the hosts flew out of the blocks. After a mix-up in the box resulted in a penalty being awarded. Lyons stepped up and fired straight down the middle to level the arrears.

The Reds' resurgence didn't last long though. Two minutes later, Kay capitalised on a defensive mix-up to stroke the ball into an empty goal and restore Chadderton's lead.

Fish's side were in a rampant mood by this point and extended their lead just four minutes later. Turnbull was again quickest to react to a loose ball, but this time the captain finished exquisitely at the back post after the ball was drilled across Carr's goal.

AFC Liverpool did respond once again as Hardacre calmly slotted past a defeated Hadlow, but Chaddy weren't to be denied. With just 13 minutes left on the clock, Turnbull completed his much deserved hat-trick after chasing a long ball and firing an unstoppable volley past Carr to send the travelling Chadderton faithful into raptures.

Hardacre claimed a second three minutes later. This time, the winger's speculative effort cannoned off the upright and Hadlow, before bobbling into the empty goal.

Despite the hosts'endless efforts, the result was put beyond any doubt in the 93rd minute when Chadderton were awarded a penalty. Substitute Iluobe was brought down by Liam Kavanagh close to the byline. The forward dusted himself off, before stepping up and effortlessly firing past Carr to secure a memorable 5-3 victory.