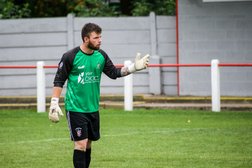 Chadderton succumbed to a heavy 7-1 home defeat at the hands of Lower Breck, on what proved to be a miserable evening at the ARK Fleetech Stadium.

Siyam Muhammad claimed his first competitive goal for the club midway through the opening period, but Peter Donnelly's quadruple combined with further scores from Callum Hill, Mason Nevitt and Jamie Morton, secured a comprehensive victory for the Liverpool-based outfit.

Chadderton entered the tie following the disappointment of losing a two goal lead to draw 2-2 at Atherton LR last Saturday, whilst Lower Breck were firm favourites, having pummelled Garstang 5-1 last time out.

The hosts made a flying start though, less than 30 seconds had passed by the time Oumar Camara stole the ball from underneath Jamie Henders' toes and produced a fierce strike from distance, but his effort was far too high to trouble Breck stopper Josh Molloy.

In an enthralling opening minute; the visitors had a chance of their own when the ball fell kindly inside the area to Jay Colbeck, the winger fired high to Jordan Hadlow's right but the Chadderton goalkeeper produced a stunning save to tip the ball over the crossbar.

Although the Liverpudlians were kept at bay on this occasion, a breakthrough was inevitable and it duly arrived in the 10th minute. After Chadderton had gifted Gary Moore's men with a needless corner, Callum Hill rose highest to nod the ball beyond Hadlow.

Chaddy responded well however and were unfortunate not to have got themselves on level terms just four minutes later. Captain Jack Turnbull evaded several challenges before coolly finding Ryan Shenton, the midfielder then sidestepped past full-back Tom Kinsella and drilled the ball down to Molloy's left, but the keeper extended an arm to preserve Breck's early lead.

Shenton was to be at the centre of attention in Chadderton's next passage of play. This time, the 19-year-old again found his way inside the area and appeared to be tripped by Breck skipper Ricky Ager but despite the strong claims for a penalty, referee Craig Kershaw waved play on - much to the frustration of home players and supporters alike.

The Reds' pressure would pay dividends though; with 25 minutes on the clock, Shenton's elegantly delivered chipped pass caused Molloy to rush out of his goal and clear his lines, but the keeper's clearance cruelly rebounded off the face of the onrushing Muhammad and into the empty goal.

Despite clawing themselves back into the game, the turning point of the contest arrived when Chadderton conceded two-quick fire strikes in the space of just three minutes.

First, Hadlow produced a stunning reaction save to palm Henders' close-rang header onto the post, but Donnelly reacted quickest to convert from the follow up.

Moments later, a corner resulted in the loose ball falling into the path of Nevitt on the edge of the area and the midfielder rifled the ball into the bottom right-hand corner to claim a stunning goal.

The scoreline could lead some to believe that the visitors were dominant from start to finish, but this wasn't the case.

Chadderton enjoyed a 20-minute spell of pressure after the break and almost claimed a consolation when Jack Snape's goal-bound effort was cleared off the line, but Breck would extend their lead in the 67th minute completely against the run of play.

Morton whipped an over-hit cross towards Hadlow's far post and as the goalkeeper backtracked towards the upright, he unfortunately fumbled the ball over the goal-line.

Donnelly would complete his hat-trick in true striker's fashion soon after, first capitalising on an error to divert the ball home from close-range, before latching onto Ager's long ball and producing a deadly finish to stroll the ball past Hadlow.

Lower Breck and the lethal Donnelly weren't finished there though, debutant Phil Veal's wayward pass allowed Louis Austin to race clear before squaring to Donnelly, who walked the ball around Hadlow and over the line - much to the delight of the sizeable travelling contingency.

Following the game, Chadderton manager David Fish said: "Tonight was embarrassing and unacceptable. As a coaching staff and players we will work to make sure it's a one off."

Man of the Match: Jack Turnbull.