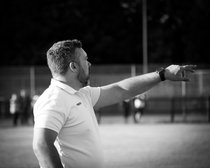 Chadderton rue missed chances as Wilkinson strikes late to clinch all three points for the visitors.

Despite producing a battling performance against high-flying Longridge Town, second half strikes from Harvey Close and Daniel Wilkinson condemned Chadderton to a heart-breaking 2-1 defeat in a fascinating affair at the ARK Fleetech stadium.

David Fish’s side led 1-0 at the break thanks to Jack Turnbull’s strike - his first since re-signing for the club from Silsden last week. However, despite the positive start, Chadderton struggled to deal with Longridge’s direct approach in the last 15 minutes with substitute Close equalising, before Wilkinson slotted in a last-gasp winner to seal a third straight win for the visitors.

The hosts headed into the contest on the back of a 4-2 defeat at the hands of Steeton but showed no sign of that affecting them as they started the game brightly and on the front foot.

Chadderton took just five minutes to take the lead, with Turnbull converted past Town stopper Lee Dovey to mark his return to the ARK Fleetech Stadium after a good ball into the box from Sam Riley.

Despite taking the lead, in the eighth minute Chaddy suffered a blow at trying to build on their early good work. Skipper Ryan Shenton, who was feeling the effects of an early challenge, couldn’t continue - forcing the home side into an early change with Leon Iluobe replacing him.

Looking for a way back into the game, the lively looking Town striker Jason Hart failed to execute an ambitious overhead kick as Longridge started to threaten.

Chaddy debutant Steven Dryden was called into action twice in quick succession; the keeper produced a fantastic save to deny Turner, who was put through on goal after a fantastic ball by Alexander Murphy.

Two minutes later, after some great close control from Hart, Dryden pushed the striker’s effort around the post to preserve his side’s lead. The Reds also survived a scare with Doughty heading against the post from a corner.

However, Chadderton continued to work hard, winning the majority of second balls and looking for the opportunity to break in numbers.

Iluobe grew into the game; using his pace down the left flank following a Chadderton counter, only to be brought down cynically by Morrison to deny him the chance of racing through on goal.

After an eventful first half, the tempo of the game slowed within the last ten minutes as either side failed to create an opportunity - allowing Chaddy to go into the break with a 1-0 lead.

After the break, Chadderton came flying out the blocks with Dovey producing a fantastic save from Jack Ward’s freekick in a dangerous position. Another chance shortly followed as the ball fell to Matthews in the area who fired straight at Dovey.

Following a bright start to the second half, Iluobe was again involved in creating a chance for Turnbull looking to double his and the Reds tally but could only head straight at the keeper. Turnbull thought he’d made amends for his miss shortly after as he had the ball in the back of the net but was adjudged to be offside.

A big chance followed for Ward, who should have put the game out of sight for Chaddy, after being put clean through on goal but miss-hit his effort wide.

Moments later, Hart thought he had drawn his side back level with a well driven half volley into the corner of the net, but the linesman’s flag came to the rescue.

Two more chances fell to the unfortunate Turnbull who was left frustrated after wrestling his way through but dragging his shot wide and then being denied by Dovey after being put through again later on.

Longridge started to build the pressure and made Chadderton pay for their missed chances in the 77th minute with substitute Close making an instant impact; steering a volley into the corner of the net from close-range.

The final ten minutes proved to be difficult for Chadderton, as Longridge threw towering centre half Ryan Mckenna up front for a more direct approach to desperately try and grab the three points.

But the Reds’ hard-work was finally undone, despite calls for offside, when Wilkinson fired home a last gasp winner for the visitors ensuring all three points returned to Lancashire.