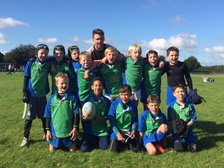 CCRFC vs Bromsgrove RFC U10

CCRFC U10's give everything to win first game of the season against Bromsgrove RFC.

CCRFC welcomed Bromsgrove RFC U10's and Stourbridge U7's to the club this morning for our first fixture of 2016/17. The sun was shining, and we had a good turnout of players and parents.

I will report further on the U7's as I only refereed the U10's game, but safe to say, I think everyone enjoyed themselves.

Bromsgrove turned up with 8 players, including Emily, (ex Redditch RFC last year!). I have to mention that as she smashed our boys up last year. Great little player!
We had numbers today, so we had rolling subs, and we included our few U9's to give them a taste of the action.

Bromsgrove opened their try account early with a score in the corner, a result of some great recycling and movement of the ball to enable them to break the line. This was the wakeup call that Chaddesley needed as they responded with their own try in the corner to level things up. The tackle was key today, as both teams had some great runners, and the ability to keep the ball alive. We only had 4 or 5 scrums and 3 restarts from the touchline in the whole 60 minutes of play, so great work by everyone in keeping the game flowing - made my life very easy today. Both teams had moments during the game where their "one on one" rucking was brilliant. We need to work on this area to improve the way we secure the ball for the scrum half. A couple of instances where we were handling the ball on the ground or picking it up from the side saw a few penalties awarded to Bromsgrove. This all improved throughout the game though. A couple of hard knocks to Bromsgrove players in the first half, but they got up and carried on - brilliant.

We exchanged scores until the first break, with Chaddesley 3-2 up. The second half started with Chaddesley having swapped almost all of it's team, including bringing Rufus, Billie, and William on, who were amazing - great tackles lads, great running with the ball, and lots of hunger to get stuck in with the bigger boys and girls. Again, great play from both teams, with lots of tackles, lots of rucks, stripping of the ball; lots of action culminating in Bromsgrove gaining a slight lead of Chaddsley 6 - 7 Bromsgrove.

Bromsgrove were getting tired, having no replacements, but carried on bravely into a third half with much of the same intensity. Great handling and ball carrying, but Chaddesley put in some monster "try saving" tackles, to stop Bromsgrove increasing their lead. Instead a few great runs, with the ball being moved through the hands saw Chaddesley finish the game with a 9 - 7 lead.

We all congratulated each other on such a great game! One of many great ones this season, I think.

Guys, if I have forgotten anybody, I apologise, the game was action packed, some brilliant rugby, and a great final score.

One other thing to say about today reflects what we strive for as a club. There was not one instance of poor behaviour today. Not one player, from either club, complained about or questioned any of the decisions I made whilst refereeing the game. In fact, there were instances where I could see, that most of you totally understood why the whistle had been blown. A credit to both teams.

A big thank to Simon for coaching you today, and to your parents for their massive support on the touchline.