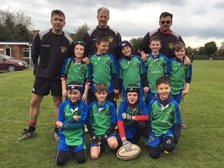 U9's "Smash It Up" in thrilling games against Redditch

Sorry - Cannot contain myself!!! We met Redditch back in January, and despite a good hard game, they managed the win on the try count. Their coaches said that we gave them a lot of "questions to answer", - I think that we were unlucky then not to get the win.

NOT TODAY!!! We knew that Redditch have some great little players, and they have a young lady on the team who is fast, accurate & fearless in the tackle.

Game 1 was fast paced from the off - Redditch played a tight game, deciding to constantly crash the ball, to which the boys quickly got to grips with. Some fantastic tackles, and smothering of the ball carrier ensured that Redditch were very much on the back foot all game. Tries, came from shear effort and determination from both sides, and their were some very hard try saving tackles made. I had this game CCRFC 4 vs 3 Redditch, (Redditch say it was a 3-3 draw).

Game 2 didn't disappoint either. They all left everything they had on that pitch today. Tries came for both sides from running at the defence and managing to get the offload allowing the speedy ones a chance to stretch their legs.

Tom M, Tom, Will, Leo and Dawson provided some full on work at the breakdowns. Will's line speed from breakdowns and free passes was phenomenal, wrapping the ball carrier up every time. Alex and Ben worked hard as 9's to recycle the ball quickly to George and Franz who were constantly running great lines. The work that these boys put in, stepping inside from being close to the touchline, was incredible, and meant that we didn't lose possession. We won the ball back so many times from driving Redditch into touch. Game ended a draw at 4-4.

A couple of high tackles and a few knocks today, on both sides, but all in all, two very good games of rugby. I am so looking forward to next season now, where we will be introducing the "ruck" with controlled competition for the ball at the breakdown.