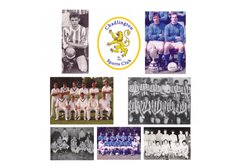 It is with great sadness that we heard the news that Graham Duester had passed away last week. He was a true man of Chadlington.

Graham was born, raised and lived in Chadlington as well as playing football, cricket and darts for the Sports Club. He also volunteered much of his time to help behind the bar and to also clean & maintain the club for many years. His battle with cancer was long but his determination and dignity throughout this period was inspirational.

Graham started playing football for Chadlington at a young age in the early 1960s and helped the side rise to glory 20 years later in the 1980s. Among his medals were the Oxfordshire Charity Cup, Oxfordshire Junior Shield , W&D Premier League and many other cup competitions including the Fred Ford Cup, Morton Floodlit Cup and Chipping Norton Charity Cup. He was a pacey player and well know for his hard tackling in an era of hard tackling! He also had a spell playing for Chipping Norton.

Graham was also an excellent cricketer and opened the bowling as a medium fast bowler. He took many wickets for the club whilst always bowling from the Village Hall end, never from the School End. Graham also had spells playing for Milton-u-Wychwood, the Southern Electricity Board and Great Tew.

He was a lover of his garden, allotment, cycling and of course his dedication to Preston North End.

Husband, Father, Brother, Grandad and Uncle. He was a gentleman and it was a pleasure to know him. From everyone at the Sports Club our heart felt sympathies go out to all the family, Wendy, Kevin & Laura, his grandchildren Chloe and Jack and to brother Paul & family.

Grahams funeral will be on Wednesday 16th September in Chadlington. Due to restrictions the service at the church is for family members only.

The family would however respectfully like to invite all those wishing to pay their respects to meet at the club as Graham’s wish was to be taken around the sports field one last time. The procession will take place at 10:45am.

At 12:45 after the service, drinks will take place at the Sports Club and there will be a book of memories available to sign. Due to limits to the indoor capacity we ask that family members are given priority. Outdoor areas are of course available.

We ask that anyone wishing to attend at the Sports Club takes note of all new Covid-19 restrictions and stays safe at all times to help the family give Graham the send off he deserves.