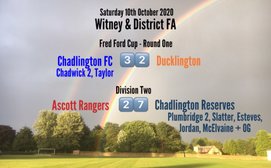 Chad have hopes to do well in the cup again this season having reached the semi final stage last year but saw the game cancelled due to Covid-19 lockdown.

With 2 goals from Matt Chadwick and another from Ethan Taylor they won 3-2 and having failed to take many other chances, it could have been more.

They will now face Wootton Sports in the second round.

Chadlington Reserves made it a double win weekend and secured back to back victories in Division Two as they thrashed Ascott Rangers 7-2. The side welcomed back Adam Tinkham and included Sam Coles and Jordan McElvaine who made their Reserve debuts.

Mauro Esteves opened the scoring with Jordan McElvaine grabbing the second on his Reserve Team debut as they ended the first half 2-1 up.
Ollie Jordan claimed Chads decisive third goal direct from a corner before George Slatter slotted home once again.
Martin Plumbridge came on as a second half sub to grab two headed goals and the scoring was ended when Ascotts number 10 headed into his own net to sum up their agony.

This was a mature performance and shows signs of the team getting into their swing.