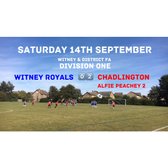 Chadlington First Team got their Division One season off to a great start as they beat Witney Royals away on Saturday.

It was a solid performance all over the pitch and thoroughly deserved. Chad had to be patient though to get the break through with the game being goalless at the half time break.

Alfie Peachey broke the deadlock on the hour mark and soon followed it up with a second from the penalty slot. He has now scored 18 goals in his last 9 games for Firsts and Reserves.

With captain Jay Webb unavailable, Ashley Hughes stepped up as captain and put in a stand out performance in the centre of midfield. Rocky Burton came in for the unavailable Matt Chadwick to make his club debut. Ewan Thomas returned to action having last played during the 2017-18 campaign and Cameron Hannington added fresh legs in the second half to close the game out.

A comfortable win on a sunny September afternoon, a clean sheet, no injuries and no bookings. A great way to start the season!