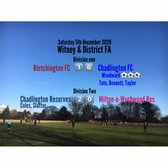 Chadlington First Team returned to action following the second national lockdown on Saturday and travelled to second placed Bletchington FC in Division One.

Having suffered three disappointing consecutive defeats in the league prior, this was a chance to reset the season and start again.

With some late drop outs of key players the night before and on the morning of the game, plans were severely hampered and so into the side were drafted 3 players from the Reserve Team.

Despite the set backs the team produced a fantastic performance and ran out 6-1 winners with goals from Pete Tate, Ethan Bennett, Miles Taylor and a hat-trick from Lee Woodward.

Chadlington Reserves returned to action on Saturday on the back of three straight victories and were looking to pick up that form again against Milton-under-Wychwood Reserves who were level on points with them at the start of the game.

It didn't take long for Chad to get a foot hold in the game as a quick break after just 5 minutes enabled Sam Coles to slot home to make it 1-0.

Just 10 minutes later the score was doubled as Brin Mayne put in an excellent cross and George Slatter headed neatly home from 10 yards to grab his 7th of the season.

From then on in the match was a battle of attrition as both teams went end to end with chances. In the end though, the sides cancelled each other out and there were no further goals.