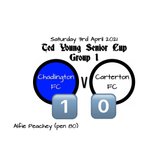 Chadlington First Team got their Senior Cup challenge off to a flying start with a 1-0 win over favourites Carterton FC at home on Saturday.

Before the suspension of W&D league football, Carterton FC were sitting top of the Premier Division with Chad having an indifferent season in the middle of Division One.

However, the First Team do usually raise their game against the better teams and the club is historically a better cup side and have one this cup more times than any other.

The game was dominated by Carterton for the first 20 minutes but this spell was ended when Chad keeper Joe Bennett suffered a serious injury. The game was delayed for 30 mins waiting for an ambulance.

On the resumption of the game Chad found their rhythm and were able to counter attack.

At half time the game was 0-0 with both sides spurning chances.

Further injuries were suffered but fresh legs off the bench gave Chad the boost they needed.

Alfie Peachey was the pick of the strikers and on 80 minutes was brought down inside the box to earn Chad a clear penalty. He stepped up and slotted home despite the Carterton keeper diving the right way.

The next 10 minutes were a tight affair but the team held out to secure a memorable victory.

Post game the news came though that Bennett had suffered a dislocation fracture to his ankle but was discharged later that evening. The help and professional manner of the Carterton players and managers as well as referee Dave Stanley is greatly appreciated by Joe and everyone at the club.

A big thank you also goes to stand in managers James Mayne and Rory Shadbolt.