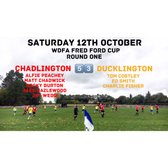 Chadlington First Team progressed into the second round of the Fred Ford Memorial Cup on Saturday as they found their way past a determined Ducklington on Saturday.

Despite Ducklington playing in Division Two they gave Chad a run for their money and dominated the early exchanges.

Ducklington opened up the scoring and took the lead on 3 occasions but each time Chad replied quickly to keep themselves in the game. At half time the score was 3-3 with Alfie Peachey, Matt Chadwick and Rocky Burton scoring for the home side.

In the second half Chad upped a gear and a keeper error from the Duck goalkeeper allowed a Jay Webb shot to slip through his fingers. The game was then secured as Jacob Hazlewood broke on the counter attack to put the ball into an empty net from long range.

In the second round Chadlington will now face Division Four side East Oxford Rangers at home in November.