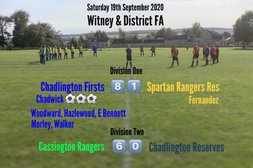 Chadlington First Team opened up their Division One season with a fine win against Spartan Rangers Reserves on Saturday. It was a fitting performance which was dedicted to Graham Duester who recently passed away, a minutes silence was observed before the game.

This was the first league match for the team since 7th March following the suspension of all football due to Covid-19 restrictions.

The side put eight goals past Spartan with Matthew Chadwick collecting a clinical hattrick. Lee Woodward, Jacob Hazlewood and Jarvis Morley also added to the scoring as too did Toby Walker from the back. Ethan Bennetts hard work in midfield was also rewarded with a goal, the 18 year old popped up with his first for the 1st team.

In midfield there was a first team debut for Ashley Godin having returned to the club after a year away. He put in a fine performance as too did Pete Tate who also joined this summer to give the side energy in midfield.

Unforunalty the clean sheet couldnt be achieved as Spartan scored direct from a Fernandez free kick.

There will be tougher games to come for the First Team and especially against Hailey Reserves next Saturday. However, this was an excellent start to the season and lifts morale and atmosphere for the season ahead.

Its been 26 years since Chadlington Reserves last played in Division Two of the Witney & District and in contrast to the First Team this was not the best of days.

Following a league reshuffle, the Reserves were promoted to Division Two after a points per game ratio from last season put them at the top end of Division Three.

On Saturday they came up against the newly renamed Casssington Rangers who had ran away with Division Four last season. In their opposition Chad found Cassington to be too strong and on a big flat, bumpy pitch they could not get into the game.

Against a strong wind Chad found themselves 2-0 down at half time through a direct (and dubious) freekick and an own goal. At half time there was hope that they could get back into it but a series of mistakes early in the second half saw Cassington cruise to a 6-0 victory.

The Reserves made a few good chances and failed to convert a penalty but were well beaten on the day. The game will be a reminder of the tough challenge that they face this season, playing many first teams and established sides in Div 2.