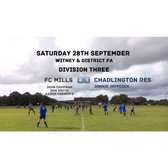 Chadlington Reserves suffer their first league defeat since December 2018 as they went down 4-1 to FC Mills in Division Three on Saturday.

Despite a bright start that should have seen them take the lead it was a game in which they struggled to find the right balence. Chances were far between and eventually they were caught on the counter attack while pushing to get back into the game.