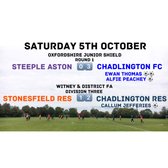 Chadlington First Team got their Junior Shield campaign off a flyer with a win against Banbury District side Steeple Aston on Saturday.

It was comfortable afternoon for the blues as they were rarely threatened. Goals came from Alfie Peachey and 2 from Ewan Thomas.

Chadlington Reserves bounced back from their league defeat from the week before and came from behind to beat Stonesfield Reserves in Division 3.

Stonesfield started as much the better team and grabbed the lead from Shaun Kemp via the penalty spot.

From then on Chad made progress and steadily got themselves back in the game. Callum Jefferies grabbed 2 goals to give them the lead.

It could easily have been a point a piece though as Stonesfield piled on the pressure late in the game. Chad keeper Josh Betts was the hero though as he saved a late penalty to secure the points.