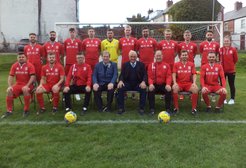 This Easter Bank holiday fixture at Wincanton produced some fast attacking football on a dry hard surface with the teams sharing the spoils and at the final whistle a three all goal draw being a fair result. An explosive start to the match saw Chard set up an immediate forward movement from the kick off and following a goal mouth scramble Liam Cleal was in position to score the opening goal on 2 minutes. Chard’s lead, however, did not last long with Wincanton equalising on 5 minutes when Toby Cole went through the Chard defence to score.

Following several corners, the home side went ahead on 16 minutes when James Irwin scored with a first time strike. Play continued at pace with a Chard chance over the bar from a corner together with a shot just wide and an overhead kick from Andrew Holmes glance away off the crossbar.

On 30 minutes Nathan Warren was Red Carded for a tackle which some considered a rather harsh decision. This did not deter Chard who pushed forward with a Max Westlake shot going for a corner and on 34 minutes Sam Smith scored from close range. For their part Wincanton also set up some attacking moves and some 4 minutes later scored again when Toby Cole got his second goal.

In the second half Steve Friend and James Boyland replaced Sam Smith and Liam Cleal in an endeavour to break through the home defence and some more attacking moves by Chard saw a Boyland cross giving Friend a scoring chance on 59 minutes to be followed by a free kick after James Boyland was fouled on the right flank. A pin point Max Westlake cross from the free kick found Ryan Parris in position to rise above the defence to head the ball home and bring the scores level at 3 – 3 on 67 minutes. With end to end play and several free kicks and corners for both sides chances could not produce a winner with credit to the Chard side, down to 10 men, the back line defended well and indeed in the last minutes could possibly have snatched a further goal with a Boyland effort just over the bar.