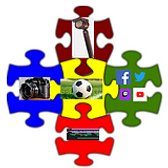 We would ike to bring your attention to the website of one of our newest supporters in the 2020-21 season.

Ryan Robinson approached us at the start of the season, as part of his course at South Staffordshire college.

Working alongside our press officer, Ryan has already written Chasetown match reports, some of which we have featured on our club website and the Lichfield Live website. He's also received positive feedback from the Sports team at the Express and Star newspaper.

He's now launched his own website as part of his course, which features his match reports watching the Scholars and Tamworth.

We are delighted to help him on his way by publicising this for him, particularly as it may inspire others with autism to branch out in their chosen careers.

Good luck Ryan and we hope we have football back at the Scholars Ground soon, and maybe we can get you filming some matches for Swanny and Jamie to analyse!