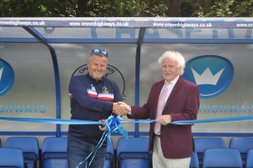 Chief Executive Mick Joiner and Steve Jones, owner of club sponsors Crown Highways did the honours of cutting the blue ribbon to unveil the new dugouts.

Crown Highways, in their ninth season of sponsorship, provided the new dugouts in the close season.

It's a far cry from the original brick dugouts that were built when the Scholars Ground began life in 1985. These were replaced by the white dugouts ahead of the 2005 Oldham FA Cup tie.

And now it's the third generation of life on the bench for the Scholars and visitors management and substitutes.

As ever, we thank Steve Jones for all he does for our football club.