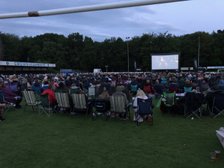 Chasetown FC are delighted to say that the two recent film nights were again huge successes.

The club can confirm that there were around 250 attendees for the Thursday night showing of the Richard Gere and Julia Roberts hit movie "Pretty Woman" while a staggering 850 showed up for the hugely successful biopic of Freddie Mercury's life "Bohemian Rhapsody".

A club spokesperson said, "There was an incredible atmosphere on both nights. There were 850 people on Friday night and I'd have to say there were probably no more than 5% of our regular fanbase in the audience... comfortably over 90% of the attendees at The Scholars Ground for the film were newcomers to Chasetown FC .

"One person said to me, 'It's great to have events like these so close to home'."

Mandy Arthur from Burntwood said, "I have attended all of these films to date. It's great for the community as well as the club. I like the family atmosphere. More of the these events could be offered."

Two more such events are in fact already in the diary.

Tickets are available from https://www.eventbrite.com/