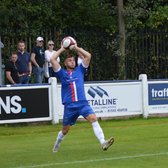 A late goal was enough to keep Corby unbeaten after Chasetown had numerous first half chances.

Alexander then saved from Jordan Evans and Mitch Botfield with O’Callaghan then hitting the crossbar with the rebound.

It was fully deserved when the hosts took the lead. Botfield curled an effort from well outside the box that dipped beyond Alexander and in-off the underside of the crossbar.

Evans then forced another save as Alexander kicked away at full stretch.

Corby had a little of the early second half play but the closest they came in the third quarter of the game was a Hilton Arthur shot dragged well wide.

Chasetown had a couple of half chances to seal the victory but the league leaders
at the start of play hit back on 85 when a long throw fell to Michael Jacklin who steered the ball home, spoiling Chase keeper Curtis Pond's clean sheet on his 250th Scholars appearance.