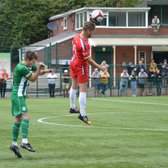 Chasetown drew their third game out of five in the league.

The bank holiday match failed to live up to a classic with shots on target few and far between.

Nine minutes in, the hosts Curvin Ellis had an effort blocked against the side he represented last pre season.

Chasetown saw a chance thwarted by keeper Sam Lomax when Liam Kirton beat the offside trap and was unable to square the ball across.

Eesa Sawyers struck the side netting just before half time in a game that didn’t see a shot on target in the first period.

The Scholars finally registered an attempt on goal as Luke Yates warmed the gloves of Lomax.

Jack Edwards put in a few telling crosses with no one able to get on the end of them.

A quick break from a United corner resulted in skipper Danny O'Callaghan volleying narrowly over the crossbar.

Substitute Jack Langston then forced a save with his first touch with a header goalwards from a Yates cross.