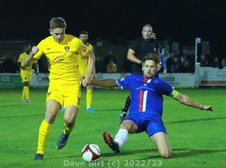 Chasetown faced off against newly promoted Harborough Town for the first time ever.

The Bees were the first to have a chance of note when Joel Carter struck a shot that was gobbled down the throat of Curtis Pond in goal.

This was closely followed by a Mitch Botfield shot up the other end that was collected at the second time of asking by Elliot Taylor to deny Chasetown the lead.

The Scholars came close again when Jonathan Letford had his shot palmed wide for a corner which did not trouble the visiting defence.

Harborough almost capitalised on a stroke of luck when a clearance thundered off Rhys Kelly and only narrowly cleared the bar to go over for a goal kick.

The second half was only four minutes old when Chase came close with a Jack Edwards corner which was met by Ryan Wynter only for his shot to land safely in the gloves of Taylor.

It was Wynter again who almost broke the deadlock minutes later when he met a cross on the volley only for his shot to go over the bar.

On the hour Letford almost took the lead for the Scholars only for his shot to narrowly go past the far post.

Chasetown had one last chance a minute before the final whistle only for Ben Lund to hit his shot wide thundering the board behind the goal.

Tonight was not to be for Chasetown and they will take a break from the league when they face high flying league rivals Stamford away in the FA Trophy this Saturday.