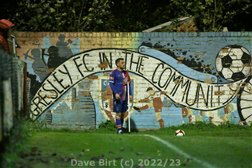 A second half goal from Michael Williams separated the sides this evening.

Chasetown could feel as if it was never going to be their night in front of goal.

Jack Langston struck the crossbar in the first half, while after the break, Gresley could easily have put through their own goal on more than one occasion. Chasetown also saw a corner cleared off the line.

Danny O'Callaghan unleashed a shot that dribbled wide of the post just before half time.

Ben Lund then got beyond the goalkeeper only to be denied by a block from the Gresley right back to prevent a certain equaliser.

O’Callaghan then had a header deflected wide the resulting corner twice cleared off the line.