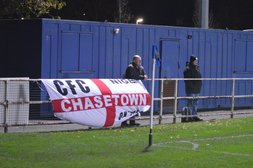 Langston goals not enough in Lincolnshire

Chasetown will be bitterly disappointed not to have come away from Spalding with at least a point.

Taking on an unbeaten side, Chasetown had the lion's share of possession in the first half, though neither side created a clear cut goal scoring opportunity - a Jack Langston shot on target the only real effort on goal inside the first 20 minutes.

It was very much against the run of play with a Spalding player was felled inside the area and the Tulips took the lead with an Archie Jones spot kick.

Alex Melbourne issued a rallying cry of "We have been the better side, we can win this."

And, a minute after the break, Langston fired home from close range and a 1-1 scoreline was the least the Scholars deserved for their play.

Elliot Sandy restored the hosts lead on 64 minutes but Chasetown weren't done and deservedly levelled again three minutes later with a superb pass and move between Joey Butlin and goal scorer Langston who added his second.

Butlin almost immediately added a third. Seemingly, he had done the hard work to get beyond the Tulips goalkeeper but wasn't able to get his shot away towards goal and the chance was gone.

The Scholars paid the price as Spalding went straight up the other end and made it 3-2 themselves with another Sandy goal.

Mark Swann's men never gave up though. Jon Letford had a chance blocked and then in the dying seconds, Luke Yates headed over the bar - a draw would have been a fair result for a richly entertaining second half.