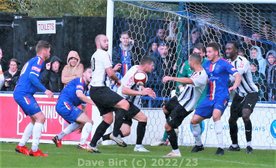 Chasetown made a dream start with a goal after 3 minutes. Ben Lund whipped a cross in and in form Luke Yates powered a header past James Martin.

Daventry called keeper Curtis Pond into action for the first time on 20 minutes when he held above his head from a long range George Ball effort.

Sustained pressure from the hosts saw Chasetown look likely to add a second. Ryan Wynter went close with a header and Yates then Joey Butlin fired over the crossbar.

The heavens opened for 15 minutes with torrential rain followed by a hailstorm as the 576 crowd rapidly looked for shelter, ahead of the arrival of the new stand.

Midway through the second half, Butlin was a whisker from making it 2-0 as he flicked a header from a Yates cross beyond Martin but wide of the post.

Playing only their second home Saturday game of the season, the early goal was enough to secure a vital three points after a long run of away cup ties.