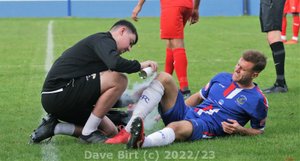 Two second half goals condemned Chasetown to a home defeat.

Chasetown started on the front foot and after two minutes struck the post with a Mitch Clarke header following a cross from the right.

Coleshill gradually came into the game and dominated possession without really threatening the home goal.

Joey Butlin almost connected with an Oli Hayward through ball but keeper Paul Hathaway and a defender averted the danger.

Coleshill started the second half on the front foot and took the lead after 53 minutes when former Scholar George Washbourne netted the rebound after Curtis Pond had saved from Liam Molesworth.

Washbourne deservedly added a second ten minutes later getting on the end of a cross from Kai Tonge after he raced down the right wing.

A flat second half saw Chasetown fail to trouble the visiting keeper.