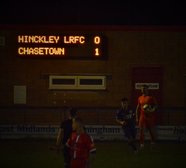 A goal midway through the first half was the decider in this tight affair.

Jack Langston headed home the winner on 19 minutes to give Chasetown another three points on the road on a cold Tuesday night in Leicestershire.

Hinckley started the more brightly but failed to trouble Curtis Pond in the away goal, while Joe Morley had an early shot that dribbled wide of the post.

The Scholars got control of the game and Ben Lund saw his effort cleared off the line, with the narrowest of escapes for the home defence.

Chasetown then deservedly took the lead when a rare Jack Langston header looped over the goalkeeper - his 11th goal of the season.

The visitors sensed they needed a second goal and Danny O'Callaghan almost obliged, heading a Kris Taylor free-kick narrowly off target and then Joey Butlin on the turn could only find the gloves of the Hinckley keeper.

Hinckley had a couple of good chances in quick succession, denied by Pond with a quick-fire double save to preserve his 70th clean sheet for the club.

On his return after a lengthy spell on the side lines, Liam Kirton was a whisker away from a goal, but put his effort wide of the post.

On a cold Leicestershire night, the travelling fans were relieved to hear the final whistle and a vital three points lifting Swanny's men back up to 12th.