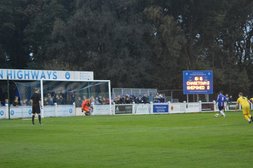 Chasetown 1 Shepshed Dynamo 0
A flurry of chances came the Scholars way inside the first five minutes. Dynamo keeper Brandon Ganley made a couple of saves from Ryan Wynter and Luke Yates as the ball pinballed around the visitors box and somehow stayed out of the Shepshed net.
Joey Butlin then forced another side from Ganley following a downward header from a Yates cross.
Shepshed had two great chances on the counter attack. First, Curtis Pond denied Sam Moore and then Jordan Evans cleared off the line from the same player.
The Scholars took control again and Yates brushed the netting with a header that dipped narrowly over the bar.
The second period began with Chasetown in the ascendancy again and Jack Langston forced a low save from the Dynamo number 1 and then Kris Taylor’s long range effort was brilliantly clawed out by Ganley.
On the hour, sustained pressure resulted in a foul on Wynter and Langston calmly rolled home the penalty kick.
Butlin almost made it 2-0 with a volley, denied by a superb block from Jordan Wakeling.
Yates took the ball beyond a stranded Ganley before seeing his shot blocked by the shoulder of defender John King to deny an almost certain goal.
Shepshed rattled the bar late on but Chasetown held on for the win.
Share via
FacebookTwitter
https://www.pitchero.com/clubs
Recent news