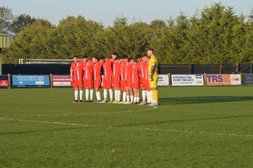 Chasetown come from behind

The Magpies took the lead inside two minutes when Oli Yun fired home from long range.

Three minutes later it was 2-0 to the hosts. Dion Frary got to the near post and diverted it past Curtis Pond - not the start he wanted in his 200th league game for the club.

Chasetown responded with two half chances. Jayden Campbell had a shot blocked for a corner and then skipper Danny O’Callaghan forced a comfortable save from home keeper Ross Bilham.

Just beyond the half hour, O’Callaghan’s shot went through the legs of a defender and Jack Langston poached from six yards to fire home.

Chasetown deservedly levelled in the 51st minute. A superb cross from Ben Lund was met by a downward header from Joey Butlin.

Bilham made a stunning save to keep out a deflected Jordan Evans long range effort and then Lund was inches wide from outside the area.

The Scholars were now well in the ascendancy and Bilham made another full length to deny an Oli Hayward volley from 25 yards.

Man of the Match Ben Lund gave Chasetown the lead with a delicate chip over Bilham from a through ball by O’Callaghan.

Langston had a shot saved by Bilham and then Lund has his shot cleared off the line by defender Richard Black as Chasetown ran out worthy winners in the end.