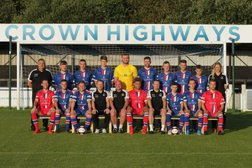 Two quick second half goals saw Sutton come from behind.

A real six pointer towards the bottom of the league saw the hosts in the ascendancy at the start. Winger Reece Gibson forced the first save of the game as Curtis Pond held low to his right.

Chase went straight up the other end and Kieran Brown headed over the crossbar.

Mike O’Reilly saw a free kick well saved by Lewis Gwilliams just after the half hour. Then Chasetown deservedly took the lead when a Kieran Brown header struck the underside of the crossbar and down over the line.

The visitor were a whisker away from doubling their lead. George Cater's corner was headed goalwards by substitute Liam Kirton but Ryan Moore cleared off the line.

Sutton had a spell of sustained pressure which resulted in the hosts being awarded a penalty kick which Reece Leek converted straight down the middle of the goal.

The Royals turned the game right around and a corner to the far post was headed home by James Beresford.