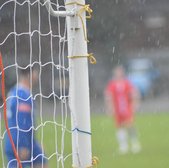 Another happy away day for Chasetown!

It's yet another 3 points on the road for Chasetown as the Scholars came hoem from Lincolnshire with another victory.

Chasetown made a positive start and the outlet of Liam Kirton was proving useful. Inside two minutes, Michael Duggon had to save well from Kirton.

The Scholars can consider themselves unlucky not to have had a penalty when it seemed Kirton was tripped by Ryan Flitton.

Spalding's first real chance was a long ranger from John Sands that rattled the crossbar.

Chasetown kept up the pressure and twice the hosts had to deny centre back Lewis Riley-Stewart from efforts after corner kicks.

The visitors deservedly took the lead in the 38th minute. Connor Haddaway beat the offside trap, bore down on goal and unselfishly picked out Alex Curtis who side footed home.

On the hour, Chasetown doubled their lead. Curtis original corner was cleared but his second cross was headed home by Kris Taylor inside the 6 yard box.

United pulled one back with 20 minutes left. A near post corner was headed home by substitute Spencer Weir-Daley.

Chasetown regained their two goal advantage. Kirton chased down the defender who slipped and Kirton took it on and fed Joey Butlin who finished to the keeper's left.