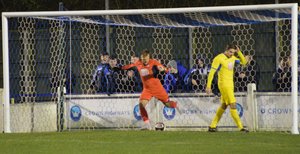 A Joey Butlin brace helped the Scholars to a dominant three points.

Just before the start of the game a moment’s silence was observed as this was the closest game at The Scholars Ground to Remembrance Sunday.

In the 7th minute Chase made an excellent start with a cross being headed off the line.

Newcastle Town had a chance to take the lead in the 33rd minute, but Nathan Morley blew it by scuffing it at Curtis Pond.

Two minutes later Chasetown took the lead when Joey Butlin headed a free kick from the right into the back of the net.

Three minutes later Butlin, almost doubled the lead but for the strong hand of Dominic Kurasik.

In the 42nd minute the lead was eventually doubled when Danny O’Callaghan buried his header into the bottom left corner.

In the second half Chasetown dominated play and this was proved when Butlin capitalised on a defensive mix up and slotted into an empty net.

Chasetown now have the rest of November off due to the Covid 19 lockdown, but will hopefully be back on the 5th of December against Glossop North End.