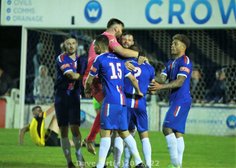 Three secong half goals were no more than Chasetown deserved in front of a bumper 482 attendance.

After rescuing a late point at the weekend, against a Belper side who had won on Saturday, it was hard to gauge which way this game might go.

The first half didn't give many clues either - both sides were looking good going forward, with both creating chances at goal. For Chasetown, the full debutant Aaron Ashford and returnee striker Joey Butlin were causing the visiting defence all sorts of problems.

There was no question that the half was entertaining, despite the goalless scoreline.

But, after the break, Chasetown grew and grew in front of a crowd of just shy of 500.

It was no more than Chasetown deserved when they took the lead in the 59th minute. An inswinging corner was guided goalwards by Ryan Wynter, with a deflection en route to the back of the Belper goal.

If it wasn't certain if the first one was to be debited as an own goal or not, the second goal almost certainly was. Two minutes later it was 2-0. Another corner was flicked on by the head of defender Joshua Woodcock, with goalkeeper Myles Wright unable to beat the ball away at his near post.

Right back Alex Melbourne completed the scoring with a right footer that zipped along the damp surface beyond the helpless Wright for a thoroughly deserved three points.