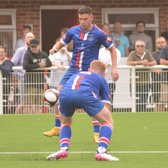 Chasetown won a dramatic end to end game in front of a free admission crowd of 1,797.

The hosts made the faster start and Billy Bennett forced a Curtis Pond save inside the first minutes. Ilkeston taking the lead was no surprise and Remaye Campbell was afforded acres of space in the penalty area and slotted it home.

Ilkeston were on top and had strong penalty claims for a handball turned down.

Eventually, Chasetown worked their way into the game and Joey Butlin and then Ryan Wynter went wide.

Four minutes before half time, the Scholars deservedly levelled the game. Skipper Danny O’Callaghan cushioned a header into the path of Butlin who fired home from inside the 6 yard box.

Ilkeston were their own worst enemies to concede the lead to Chasetown. Goalkeeper Ross Durrant came out his area and pressure from Aaron Ashford created an opening to pick out Butlin who had a straightforward chance from 10 yards.

Another defensive mix up allowed Liam Kirton time to set up Jack Langston who looped the ball into an empty net.

That lead was short lived though. Campbell netted his second with a header from a corner and then Charlie Wakefield made it 3-3 a minute later when he beat the offside trap and fired past Pond.

Chasetown took the lead again when Langston’s corner found O’Callaghan who smashed it home for 4-3.