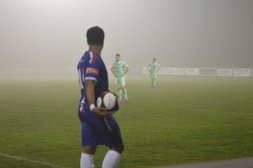 Jack Langston scored four as Chasetown ended their home fixtures for 2021 with an emphatic victory.

Chasetown took the lead after 10 minutes when a defensive header was squared into the path of Jack Langston whose right footer zipped along the surface despite the efforts of goalkeeper James Martin.

Langston added his second on 22 minutes from the wide edge of the penalty area with a sublime chip over the stranded Martin and the ball nestling in off the post.

It took a further two minutes for Langston to complete his hat trick with a curing left footer this time which clipped the inside of the post en route to completing his sixth Chasetown hat-trick.

With a comfortable lead, Scholars fans only fears were whether the fog would descend any further. Visibility from across the field for supporters was worsening but goalmouths were still clearly in view from the players and referee's perspective.

The goal glut continued in the 71st minute when Joey Butlin added his 16th goal of the season with a downward header following a right wing cross out of the fog from Liam Kirton.

Chasetown's leading scorer added his fourth and the Scholars fifth with the best goal of the lot - a chip over the keeper from outside of the area, taking his season tally to 19 and career for Chase to 94.