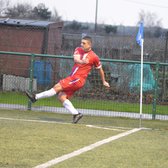 Scholars win on the road

A stunning Chasetown performance saw a deserved 3 points and the winning margin could have been wider.

The Scholars deservedly took the lead midway through the first half. Johno Atherton slotted home from a tight angle following a ball over the defensive line by Joey Butlin.

On 25 minutes, Butlin made it 2-0 when he headed home a near post corner from Oli Hayward.

The visitors almost added a third before the break. First, Hayward's free kick was palmed away by keeper William Larkin, who then saved a looping effort from Luke McGinnell.

Five minutes after the interval, Butlin rattled the crossbar from just outside the Cuckoos’ penalty area.

The one-way traffic continued as Larkin saved low to his left from another Butlin effort.

On 72, finally Chasetown added the killer third goal. Good work down the left saw leading scorer Jack Langston read the bounce after a defender missed the ball and fired past Larkin.

Langston restored the 3 goal lead in the final minute with a shot from inside the penalty area.