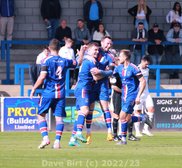 Chasetown rise to the occasion to send Telford packing in the FA Cup.

Chasetown came from behind to reach the 3rd Qualifying Round of the FA Cup for only the sixth time in their history.

After 9 minutes, the Vanarama League side took the lead when a cross was headed beyond Curtis Pond by Moore.

The visiting fans held their collective breath as Telford were a whisker away from a second with a long rang effort.

But, gradually, the Scholars began to impact the game and put United under pressure.

Midway through the half the away end erupted when Joey Butlin got off the mark for the season following a Danny O'Callaghan pass with a downward header.

You would have been forgiven for thinking Chasetown were content with just being level. But, the Scholars had other ideas and just before the break, Jack Langston also added his first goal of the season with a long range effort that flew past the Telford keeper off the inside of the post.

Just shy of the hour, Telford regained parity through Nathan Blissitt and a crowd of 613 were wondering whether that would spur on the home side to victory or whether Chasetown could regain the lead.

Telford hit the post but then Chasetown delivered a demoralising blow to the Shropshire side. Oli Hayward's curling cross was met by a powerful Butlin header that Pilling couldn't keep out.

Six minutes later, the Scholars had a cushion. Substitute Jack Edwards fed Langston and the midfield man matched Butlin netting his second goal of the game too.

Chasetown now await the third qualifying round draw with ties to be played the weekend of 1st October, replacing the Yaxley away game.