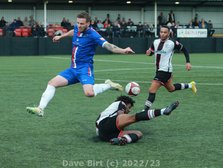 Chasetown are another step along the road to Wembley with a penalty shootout victory at Boldmere.

Chasetown were on the front foot from the off and laid siege on the Boldmere goal.

It was therefore no surprise when the Scholars took the lead. Jack Langston forced a hurried clearance and Joey Butlin looped a volley back over keeper Matt Sargeant.

The visitors looked likely to add to their tally without really troubling Sargeant before the game became a midfield scrap with limited goal attempts.

Sargeant then made a top save to his right to deny right back Oli Hayward.

Midfields and defences were also on top after the break and a snap effort in the 65th minute from Jack Langston saw Sargeant scurrying to his left as the shot zipped wide.

With 15 minutes left, the hosts were level when Ryan Shaw picked up the ball in acres of space and unchallenged fed substitute Kyle Byrne had the easiest of finishes beyond Curtis Pond.