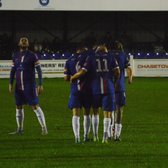 No-one in the 141 crowd could complain at an entertaining game under the Scholars Ground nights.

Chasetown leaked yet another early goal with barely a minute on the clock when Kai Tonge gave the visitors the lead.

With 7 seven changes from the weekend's game (Melbourne, Wynter, Hayward and Langston the only starters from the trip to Dereham) it was an opportunity for the youngsters to shine.

Just after the half hour, 18 year old debutant Joe Morley advanced through the inside right channel and ignored the unmarked player to his left to ping a low shot that skidded along the ground and past goalkeeper Paul Hathaway.

Five minutes later it was Jack Langston on the scoresheet again firing home to give Chasetown the lead.

A goal in the first minute, and a goal in the final minute of the half - from Ewan Williams - saw Coleshill enter the interval all square on 2-2.

The visitors then took the lead 6 minutes after the break, with Tonge again notching.

This time, it was Chasetown who needed to equalise again and that goal came 12 minutes from time when Langston scored his tenth goal of the season.

The sides couldn't be separated and it seemed the same would follow in the penalty shoot out as none of the first four spot kicks were converted, with Kris Taylor and Oli Hayward seeing their kicks saved while Coleshill saw their first over the bar and Callum Cook saving their second.