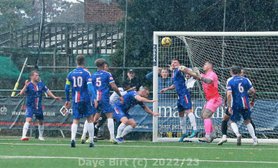 Our FA Cup exploits are over for this season.

After their heroics in the previous round at AFC Telford United, Chasetown’s fourth away tie of the season brought the FA Cup journey to an end.

Chasetown made a disastrous start conceding within the first minute – timed at 19 seconds. St Ives went straight on the offensive and a cross into the box caught the visitors napping and Jonny Edwards tapped home.

The Scholars recovered quickly and Luke Yates had a shot deflected behind for the first of a quick succession of half a dozen corners, the latest of which was curled in by Kris Taylor and bulleted home from the head of Joey Butlin.

The Cambridgeshire side regained the lead when Enoch Andoh came in from the left hand side to net beyond Curtis Pond.
Within two minutes, Greg Kaziboni almost steered in at the far post as Ives looked to extend their advantage.

Chasetown pushed on and substitute Ben Lund teed up Butlin who fired from 20 yards skimming the top of the crossbar on its way over.

With around ten minutes to go, both sides were involved in a flashpoint when Mitchell Clarke was heavily struck by a robust challenge which saw both benches off their feet.

A long throw from substitute Josh Mansell was diverted goalwards by Ryan Wynter with two minutes on the clock but home keeper James Goff held wide to his right.

St Ives reached the fourth qualifying round for the first time in their history with a third goal before the end when Johnny Herd drilled across the keeper for a match winning third goal.