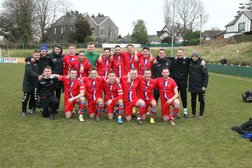 It's Kirtons for Spalding as Chasetown progress in the FA Trophy.

Chasetown had all the early play but it was Spalding who took an early lead. Lewis Riley-Stewart tripped a Spalding player and Joel Brownhill converted the spot kick.

The Scholars deservedly equalised in the 20th minute. Liam Kirton motored into the box and squared the ball to Joe Brown whose effort crossed the line despite an attempted block by the full back.

On the stroke of half time, Chasetown took the lead. Kirton was fouled on the edge of the box and when Danny Cocks struck the crossbar with the free kick, Kirton bundled home the rebound off his body.

At the start of the second half, Cocks almost made it 3-1 but Taron Hare cleared his curling effort off the line.

Chasetown increased their lead in the 62nd minute. Will Whieldon’s free kick was flicked on by Ryan Wynter and Kirton stole in at the far post to volley home from a tight angle.

Kirton completed his hat trick with a superb volley in the 70th minute at the far post following a superb left wing cross from substitute Ricky Bridge.

Chasetown turned on the style and Whieldon almost made it five, forcing a low save from Alex Smith after twisting and turning into the penalty area.

In stoppage time, sub Kieran Brown struck the crossbar but side footed home the rebound for his first Scholars goal.