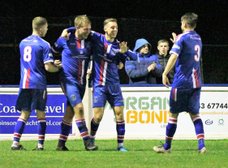 A Kieran Brown goal right at the start of the second half was all that separated these two Staffordshire sides.

Both sides rung the changes for this Staffordshire Senior Cup tie. Leek had 6 of the starters from their FA Cup game at the weekend, while Chasetown named 7 of the eleven that had started v Carlton Town.

Chasetown had the ball in the net in the first half, but Lewis Riley-Stewart's pass to George Cater was to no avail as Cater finished smartly, but was denied by the offside flag.

The only goal came immediately after the restart as Kieran Brown fired home with the outstep of his boot beyond the dive of Danny Roberts - Brown's second goal of the season.

Scholars Man of the Match Ben Easthope became the latest player from our U21s to break into the first team this season and had an outstanding game in midfield while goalkeeper Curtis Pond was relatively untroubled en route to the club's fourth clean sheet of the season.