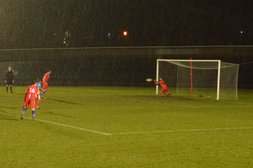 In injury time in the second half, Chasetown missed the chance to take this League Cup tie to a penalty shoot out.

Chasetown started brightly and had the lion's share of the possession but two goals in quick succession gave the hosts the advantage.

The first on 17 minutes was quite fortuitous. A free kick rebounded straight in to the path of Maxwell Chimines who netted from close range.

It was arguably against the run of play and Chasetown kept having the majority of the ball. Jack Langston fired inches wide of the upright and Kieran Brown had a looping header saved by Rajaan Gill.

It was Gill who became the focal point of the second half's main talking points. In the 70th minute a ball towards goal seemed destined to find the back of the net until Gill, outside of his area, handled the ball above his head, denying an almost certain goal.

The referee showed yellow with Chasetown appeals that the keeper should have seen red. Kieran Brown's free kick found the net via a deflection to get Chasetown back into the game, but were left wondering if they should have been up against ten men.

In second half stoppage time, Danny Cocks was brought down for a penalty and Gill dived to his right to keep out Langston's spot kick, and thus prevented the game going to a penalty shoot out.