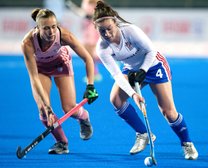 See the world's top hockey nations in action in London

The FIH Pro League is a ground-breaking, global hockey league which sees the world’s top men’s and women’s teams – including Great Britain - battling it out for sporting glory.

The tournament got underway in January and will see a total of 128 matches being staged around the world ahead of a Grand Final in June in the Netherlands.

At the end of April, the FIH Pro League heads to Europe. London will play host to 15 of Great Britain’s men’s and women’s matches over an eight-week period, with most taking place at the Lee Valley Hockey & Tennis Centre in the Queen Elizabeth Olympic Park, ahead of the final home games at the Twickenham Stoop.

International rivalries will be at their fiercest, and the hockey will be of the highest calibre so make sure you don’t miss the chance to cheer on Great Britain’s men and women – buy your tickets now!